If you thought, Baauer spent most his time sitting in front of his laptop browsing through terabytes of samples to find the right sound, think again. Just like a chef who travels the worlds culinary Meccas to find spices and new ingredients for his next signature dish, Baauer visits exotic places to discover the right sounds for his upcoming debut album.

Red Bull (of course) accompanied the artist together with fellow producer Nick Hook and filmed both of them, while they recorded the hoot of a camel in the UAE, the squeaking of a bagpipe made out of goat skin, the chant of an traditional arabic tribe or the bubbling of a volcano in Japan, just to name a few examples. As a nice side effect, you’ll get to experience some of the colorful culture in these places. Baauer is actually quite the travel guide. 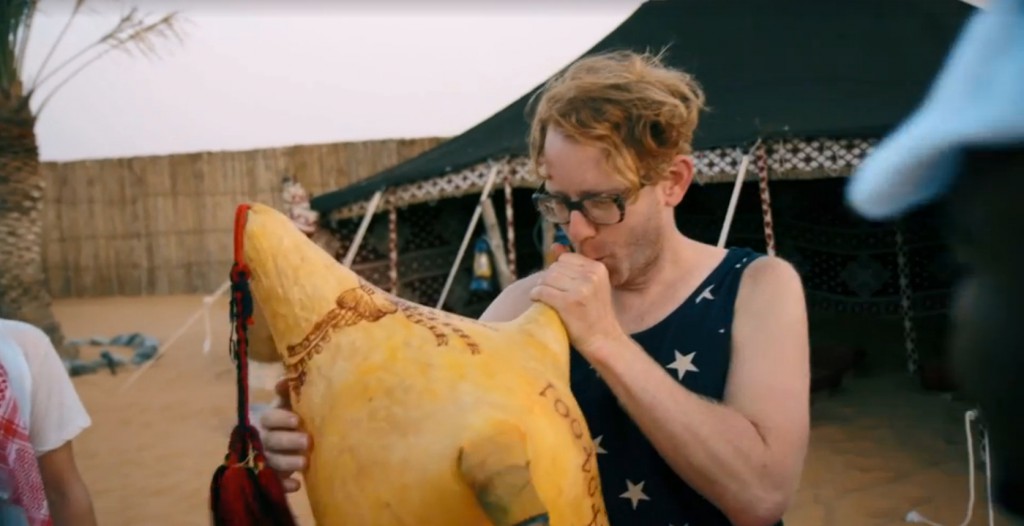 Nick Hook playing the bagpipe made out of goat skin (Source: http://baauer.redbull.com/)

The best part of the documentary, though, are the moments when Baauer uses all of the recorded stuff to do what he does best: produce. You’ll get a glimpse of what his highly anticipated first proper album will sound like. And it has nothing to do with Harlem Shake, which according to the artist himself had its “good and bad” sides.

And if all of this hasn’t made you curious, than maybe this will: Baauer eats a goat’s eyeball. Yummy.

Baauer just released the sounds he collected on this amazing journey as a sample pack, which you can download here. Thank you, Baauer.