Crispy Crust Records/Video /“Make it yours”: Rick Rubin takes us back to school (Video) 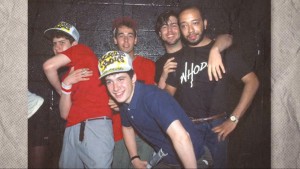 From left to right: The Beasty Boys with Rick Rubin and Russel Simmons

Co-founder Russel Simmons, who according to Rubin was the missing piece to make Def Jam a real record company, has his say, too: “We did it effortlessly. You know, with love and appreciation for the music, and that’s it.”

And Rubin concludes: “Make it yours. That’s the thing that can change the world.” Thank you Rick, we’ll stick to that advice.